A multinational war memorial should function as a site for contemplation but also awaken the human processes that means to live, remember and to go on with one's life after a tragedy. This monument is a place for remembrance for all nations that have been tormented by war during the 20th century. The site is located on neutral ground in unexploited nature; in this case the Swedish archipelago since Sweden has not been involved in armed conflict during the last century. The idea is that the barren, timeless landscape with all elements present will direct the thoughts to the earth and universal human values.

The monument is constructed as three symbolic passages that form a way of procession. From the first "rock passage" trough the "stone garden" you finally reach peace on the highest point on the waterfront.

The first part of the monument is constructed as a corridor trough the rock that forms a border between the monument and the outside world. This passage is lit with daylight that passes trough a glass ceiling constructed as a water filled basin. Granite slabs forms a path trough the water that covers the floor. The walls are covered with sand blasted images of the globe that shows the scale of warfare in the 20th century. The sound from the waterfall in the end of the corridor, the heavy pressure emerging from the raw granite walls and the suggestive light forms a beautiful yet frightening cryptic room that urges the visitor to pass hastily trough it out to the light behind the waterfall.

The second part is accessed when the visitor follows the granite path behind the waterfall either to the left or the right. The procession continues into a rectangular artificial lake where granite slabs are laid out in the water in a labyrinthic path. Years when battles were fought are engraved on copper plates and fitted to the granite in a number of places. The visitor is led trough a forest of stone monoliths that have been erected in the water. Each monolith represents one nation that has suffered from war in the 20th century. The stone material used for the monoliths is taken from the nation it represents and each nation is responsible for its inscriptions. The visitors are moving as in a Japanese Zen-garden, on the paths, over the water mirror. The movement is designed to awake the memory and consciousness of war as phenomenon. Visitors that have experienced war can visit their nation's monolith without feeling lonely. 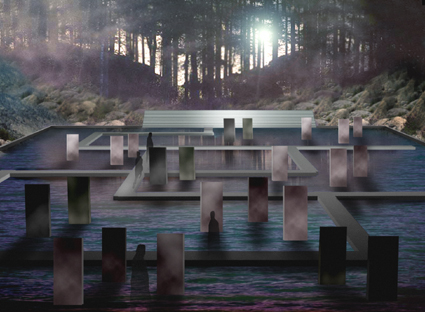 The third part represents the afterlife and the enlightment. After the visitor's symbolic journey trough the scenes of war the last path of granite is ending in a monumental set of stairs that leads to an opening in the forest. The visitor now leaves the war behind and reaches a contemplative place on a height that opens up to the open sea. A single huge monolith without any inscriptions is placed a short distance from the shore. The relation between the open sea, the monolith and the blocks of granite forms a grandiose room in which the visitors can sit down facing the sea. The monolith in the sea can be seen as a monument over the whole of humanity.

Kristina Cedrins, March 25 2004. Contact kriced[a]algonet.se
Translated by Jon Brunberg
Text and images are copyright protected and courtesy by the artist.
Download the presentation as a PDF document in Swedish here (3.53 Mb).