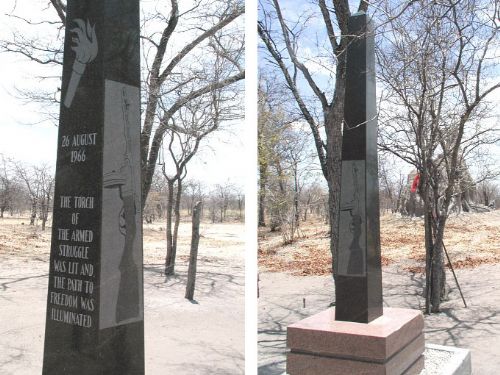 The Omugulu-gOmbashe Monument remembers the Beginning of the armed Struggle against the South African Colonial Authority on August 26, 1966 (northwest of Tsandi in the Omusati Region).
License: © | By: Klaus Dierks | Source: link | enlarge 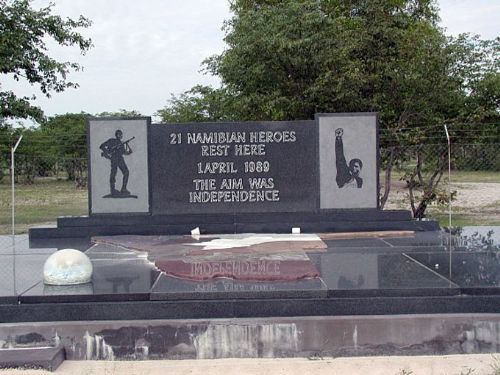 The war in Namibia between the Namibian liberation army SWAPO, Angola-backed groups and South African forces raged for over twenty years between 1966 and 1988. Above are two examples of Namibian cenotaphs erected to commemorate certain battles. Many of these events are covered in detail on Klaus Dierks comprehensive web page about Namibia, from which these photos have been taken. Mr Dierks himself passed away in 2005 and on the web page it is stated that permission is granted for public use of the content of his web site.

SWAPO proclaims the armed struggle for the liberation of SWA after the first SWAPO soldiers complete their training. The first military clashes between NAPLA and SA troops occur near the northern border with Angola (Omugulu-gOmbashe). In the mean time a further unarmed group under the command of Leonard Phillemon Shuuya (Castro) runs into a South African ambush in the Kavango. Only Julius Israel Shilongo (Kashuku) escapes and reports the incidents. Shilongo hides in the house of Erastus Mbumba. Phillemon, however, is converted by the South Africans and participates in the battle of Omugulu-gOmbashe on the South African side. After the Commander John Otto Nankudhu realises that he cannot withstand the superior South African fire power, he orders the NAPLA unit to retreat. Many NAPLA soldiers die, are wounded or are taken prisoner by the South Africans. Eliazer Tuhadeleni (Kaxumba kaNdola) escape and is not arrested until March 1967 when he is captured at Okaloko near Ondangwa.

Implementation of SC Resolution 435 commences, initiating the holding of UN-supervised free and fair elections for a Constituent Assembly. The cease-fire between SWAPO and SA comes into effect. UNTAG is not yet fully deployed (fewer than one quarter of the envisaged - already reduced - 4 650 UNTAG troops are present in Namibia and are not strategically deployed as yet, especially not in the north).
The independence process falters the day it begins, as an estimated 600 PLAN soldiers (as claimed by Pik Botha) enter Namibia from Angola and clash with SA-led security forces in northern Namibia. This allegation reflects the South African position as supported by some of the western powers. The real number of PLAN soldiers which enters Namibia from Angola, or whether these troops really come from Angola, or whether they are already in Namibia, are issues still to be verified by further research. The incident is used by the South Africans to motivate the Special Representative for UNTAG, Martti Ahtisaari (he receives an ultimatum from the South Africans who give him only half-an-hour to think it over), to release South African troops out of their restricted bases at Grootfontein and Oshivelo. On the other hand many Namibian sources show that PLAN soldiers have always been in northern Namibia. One witness , Johannes Kutumba, is the only survivor of 28 PLAN soldiers who are killed during April 1989. Kutumba reports that his unit has been in hiding in northern Namibia since December 1988. Klaus Dierks reports later that he personally had been inside PLAN camps within Namibia before the 01.04.1989.
The decisive clause in SC Resolution 435 states that "Provision for SWAPO forces inside Namibia at the time of cease-fire to be restricted to base at designated locations inside Namibia to be specified by Special Representative after necessary consultation".
As regards "SWAPO bases in Namibia", all available evidence points to the reality that although PLAN soldiers frequently cross from Angola into Namibia, and stay for longer periods in the bush and among the people, they return to Angola once their tasks had been carried out. They dont have "bases" in Namibia, in the sense of permanent installations containing personnel and technical infrastructure.
The South Africans maintain that PLAN has come to carry out offensive actions against South African security installations, to cut of the Ondangwa to Oshakati highway, to sabotage the southward power line from Ruacana, telephone lines and road bridges. There are plans for large-scale mine-laying, the cutting of water pipelines and to infiltrate the "white" farming areas around Tsumeb. The chief of the SWA Police, Dolf Gous, maintains that the PLAN forces dont care about the proposed cease-fire. "They are not even trying to hide their tracks". These South African accusations are never found to be substantiated. Two taken PLAN prisoners-of-war - who were seriously beaten up by the South Africans - are interrogated by Daniel Opande and Ed Omotoso from UNTAG. The answers the two prisoners are giving are consistent and are holding up under detailed questioning. Both men are found to be convincing. Each says that "they have been ordered by his commander to enter Namibia peacefully and not to engage the South African security forces, because a cease-fire comes into effect on 01.04.1989 and there is to be no more fighting. The UN personnel would come and take care of them".
Instead of being received by UNTAG, the PLAN soldiers are ambushed by the South African forces. Preliminarily the clashes are concentrated in the areas of Ohangwena, Omafu, Onuno, Engela, Endola and Ondeshifiilwa. The real fighting only starts on 02.04. when the situation becomes clear that there is no cease-fire.
In the next days and weeks the South African counter-insurgency forces cannot be restrained. They choose instead to have a bloodbath, a massacre. In 1998 the South African Truth and Reconciliation Commission refers to the suspicion that grave crimes were committed by those forces at that time. It was alluding to reports of the summary execution of many SWAPO prisoners [Report of the Truth and Reconciliation Commission 1998, Vol. 2].
Pro-SWAPO demonstrations staged in Windhoek to welcome UNTAG are from the start crushed by the SWA Police under the command of Jumbo Smit. The German member of Parliament, Uschi Eid, and Klaus Dierks lodge a protest with the UN representatives in Windhoek, without any success. The demonstrations continue, however, in Katutura. With between 10 000 and 15 000 participants, these are the largest demonstrations ever held in the history of Namibia.
The British Prime Minister Margaret Thatcher arrives in Windhoek, coming from Blantyre in Malawi. She immediately supports Bothas stand on the events at the northern border without any inquiry being made as to the truth of his claims.