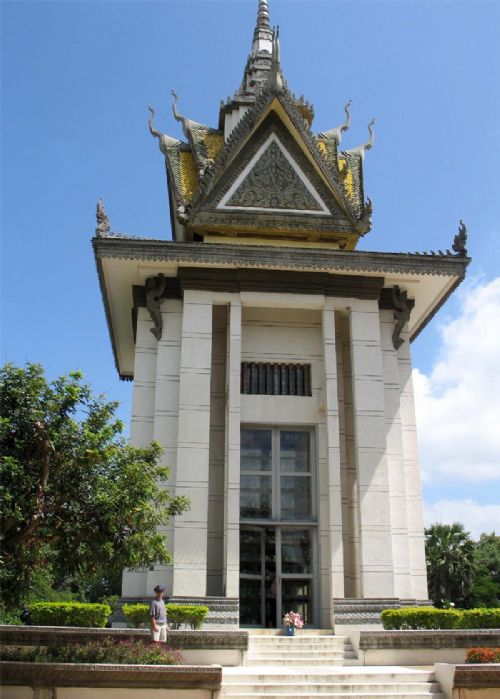 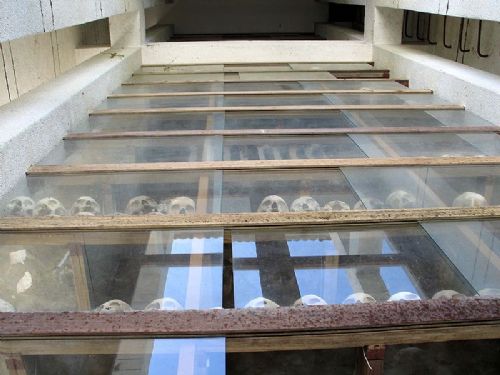 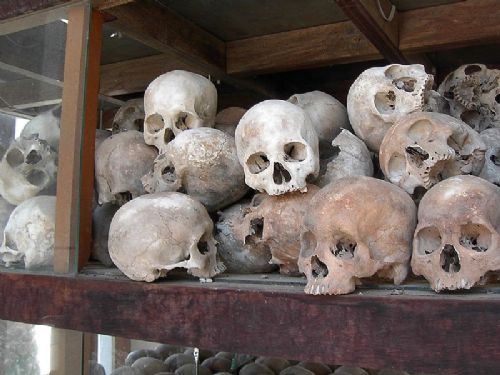 Article from Wikipedia: Choeung Ek, the site of a former orchard about 17km south of Phnom Penh, Cambodia, is the best-known of the sites known as The Killing Fields, where the Khmer Rouge regime executed about 17,000 people between 1975 and 1979. Mass graves containing more than 8,000 bodies were discovered at Choeung Ek after the fall of the Khmer Rouge regime.
Today, Choeung Ek is a memorial, marked by a Buddhist stupa. The stupa has plexiglass sides and is filled with more than 5,000 human skulls. Some of the lower levels are opened during the day so that the visitor can see the skulls directly. Many have been shattered by gunshots to the head or smashed in with implements such as hoes.

Tourists are encouraged by the current Cambodian government to visit Choeung Ek. Apart from the stupa, the visitor can see the pits from which the bodies of the 8,000 victims were exhumed. Human bones still litter the site. There seems to have been no effort to provide a proper burial or cremation for the victims. There is also a souvenir shop which strikes some visitors as being in poor taste.
The road from Phnom Penh to Choeung Ek is very poor, and very dusty in the dry season, and visitors are advised to go there by car rather than by tuk-tuk or as motorbike pillion passengers.
On May 3, 2005, the Municipality of Phnom Penh announced that they had entered into a 30-year agreement with JC Royal Co. to develop the memorial at Choeung Ek. As part of the agreement, they are not to disturb the remains still carried in the killing field.