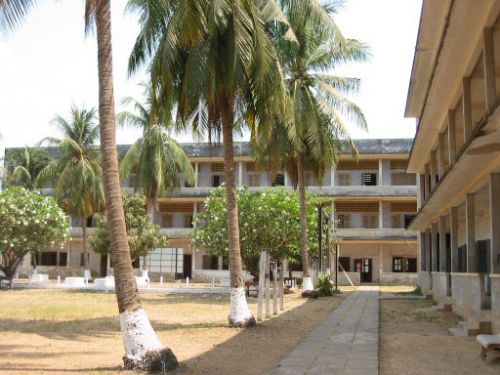 Tuol Sleng Museum, also known as the Museum of Genocidal Crimes is located in Phnom Penh, Cambodia. A former high school, it was known as the S-21 prison during the Khmer Rouge regime between 1975 and 1979. The name Tuol Sleng means "hill of poisonous trees." 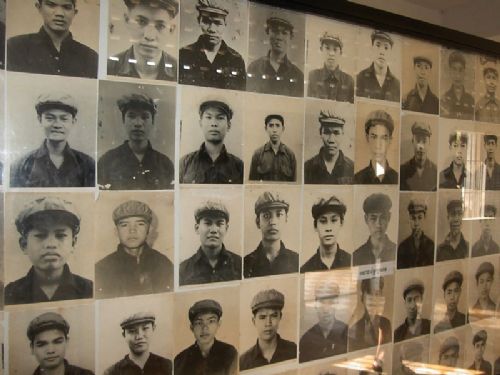 The buildings at Tuol Sleng are preserved as they were left when the Khmer Rouge were driven out in 1979. The regime kept extensive records, including thousands of photographs. Several rooms of the museum are now lined, floor to ceiling, with black and white photographs of some of the estimated 20,000 prisoners who passed through the prison. Only seven survived.

Other rooms contain only a rusting iron bedframe, beneath a black and white photograph showing the room as it was found by the invading Vietnamese who displaced the Khmer Rouge in January 1979. In each photograph, the mutilated body of a prisoner is chained to the bed, killed by his fleeing captors only hours before the prison was overrun by the Vietnamese. Other rooms preserve leg-irons and instruments of torture. They are accompanied by rather crude paintings by former inmate Vann Nath showing people being tortured, which were added by the post-Khmer Rouge regime installed by the Vietnamese in 1979. 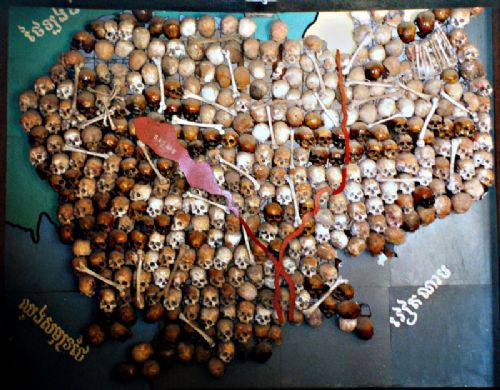 The museum is perhaps best known for having housed the "skull map," composed of 300 skulls and other bones found by the Vietnamese during their occupation of Cambodia, to serve as a reminder of what happened at S-21 prison. The map was dismantled in 2002, but the skulls of some victims are still on display in shelves in the museum.

Today, the museum is open to the public, and along with the Choeung Ek Memorial (The Killing Fields), is included as a point of interest for those visiting Cambodia. Despite the disturbing images it contains, the museum is visited by large parties of Cambodian school children.