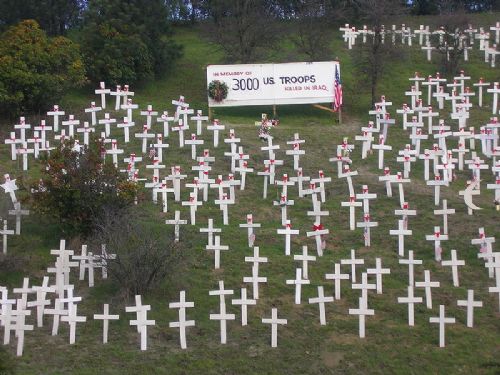 The Lafayette Hillside Memorial is a collection of crosses, accompanied by a large sign, in Lafayette, California. The crosses are intended to serve as a memorial for United States soldiers killed in the Iraq War, with the sign containing a running total of the death count. The monument began to raise controversy in November 2006.

The hill, overlooking State Route 24 in Contra Costa County, is owned by 81 year old Louise Clark and her husband, Johnson Clark, a now deceased WWII veteran. The monument was erected in late 2006 by Jeffrey Heaton, a long running anti-war protestor, and Clark. Their first 15 crosses were quickly removed by vandals. In November 2006 Heaton and Clark re-added the crosses onto Clark´s property, this time with 300 crosses and a large sign that read: "In Memory of 2839 U.S. Troops Killed In Iraq". By February 26, 2007 the number of crosses, mixed with a few Stars of David, Islamic crescents and other religious symbols, had passed 2500 in number. Crosses have been added by volunteers and some paid for by the Lamorinda Peace Group and Grandmothers for Peace. Protests of the memorial have been lead by Lafayette Flag Brigade which organizes a competing, remembrance[4] flag display on September 11 annually.

The City ordinance allowed a 32-square-foot (3.0 m2) sign on the property, and did not limit the number of crosses. The organizers initially had an approximately 64-square-foot (5.9 m2) sign, but reduced it to 32 square feet (3.0 m2) to comply with the City ordinance. The sign is updated every week to show the new official death toll for soldiers in Iraq.