The Memorial to the Wars in Indochina in Frejus 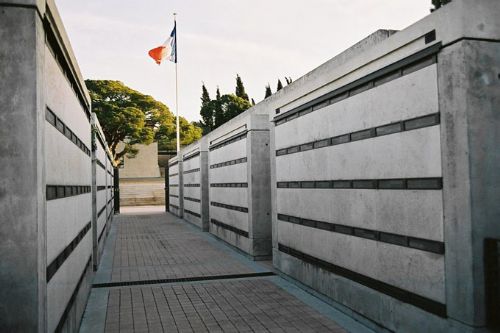 The signing of the Franco-vietnamese protocol of 1986 necessitated a search for a site in France for the placement of a cemetery. The city of Fréjus was chosen when it offered to donate the land. The choice was also symbolic in that Fréjus had played a role in colonial history: It had been the site of a military camp for forces leaving for Indo-china. A pagoda, a monument and a Marine museum recall this link with the past.

The remains in the cemetery of Fréjus are those of soldiers who "Died for France" in war time.
The remains of 3,165 other soldiers , who had died in peacetime, were reinterred in a cemetery at the military base at La Lègue. The war dead date for the most part date from 1940 to 1945 and from 1946 to 1954.
It was soon decided that the plan for a cemetery should also include a history room. In addition, a memorial erected by a veterans group in 1983 was included in the plans.

The size of the available land and the interest in designing a "place of memory" necessitated a competition based on a program established by the Bureau of Architecture.
Seventy-five proposals were presented. Six pilot studies were accepted and , on February 10, 1987, a jury chose the proposal of M. Bernard Desmoulin. The memorial, bounded by a circular ambulatory about 110 meters in diameter occupies about 5.8 acres.
The circle symbolizes a journey and, at the same time, a military zone as a heritage of tribal spiritual circles. Rows of drawers contain the identified remains of 17,188 soldiers, including 62 sets of remains from the cemetery of Luynes where they had been buried before 1975.
A path leads up to the highest point of the necropolis from where the sea can be seen, the road to Indo-china.