The Tomb of the Unknown Soldier (Damascus) 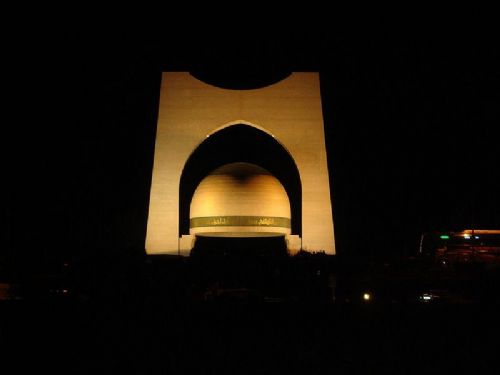 The Tomb of the Unknown Soldier (Arabic: ضريح الجندي المجهول‎) is a war memorial, dedicated to the Syrian soldiers killed during battle. It was designed by Prof. Dr. (Architecture) Abdo Kass-Hout and Prof. Mahmoud Hammad who won a competition organized by the Syrian Ministry of Defense. Erected in 1994, the monument features a dome, symbolizing the universe, and an arch symbolizing victory.

The monument has a hall under the dome featuring five large paintings depicting five epic battles from Arab history: Battle of Yarmouk, Battle of Hattin, Battle of Maysaloun, Battle of Mount Hermon and Battle of Sultan Yacoub.

The tomb is visited every year by the President on Martyrs´ Day (May 6). And it has the engravings of two verses from the Quran.

Think not of those who are slain in God´s Way as dead. Nay, they live, finding their sustenance in the Presence of their Lord; They rejoice in the Bounty provided by God: and with regard to those left behind, who have not yet joined them (in their bliss), the (Martyrs) glory in the fact that on them is no fear, nor have they (cause to) grieve.