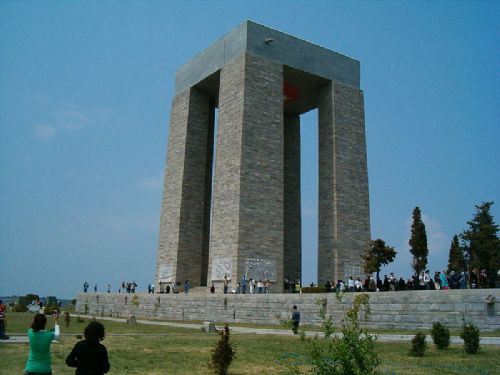 The Çanakkale Martyrs´ Memorial (Turkish: Çanakkale Sehitleri Aniti) is a war memorial commemorating the service of about 253,000 Turkish soldiers who participated at the Battle of Gallipoli, which took place from April 1915 to December 1915 during the First World War. It is located within the Gallipoli Peninsula Historical National Park on Hisarlik Hill in Morto Bay at the southern end of the Gallipoli peninsula in Çanakkale Province, Turkey.

For the erection of a memorial in Gallipoli, an architectural contest was opened in 1944. The design by architects Dogan Erginbas, Ismail Utkular and civil engineer Ertugrul Barla won the official contest. Construction of the monument was decided in 1952, and the ground stone was laid on 19 April 1954. Financial problems caused interruption of the construction works several times. The main structure was completed on 15 March 1958. In the meantime, the Turkish daily Milliyet started a countrywide financial support campaign, and the memorial was officially opened on 21 August 1960.

The museum underneath the monument was opened later and the bas-reliefs on the columns were completed afterwards. Situated to the north of the memorial, a war cemetery holding the remains of 600 Turkish soldiers was established in 1992.