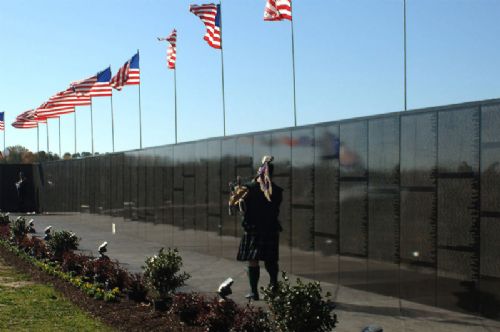 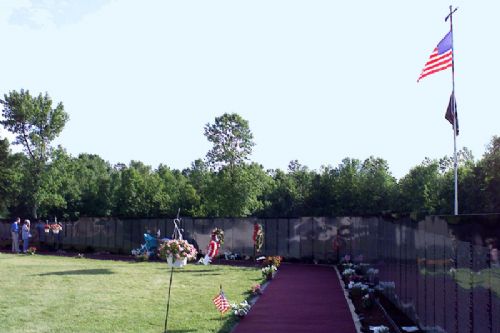 At least two replicas of the Vietnam War Veterans Memorial in Washington are constantly on tour in the USA: the Moving Wall and The Wall That Heals. Both have been created on initiative from Vietnam War Veterans who strongly felt that those who could not visit Washington DC and the Vietnam Wall should somehow be given the opportunity to receive some of its healing powers. The solution in both cases was to create a half-size replica of the original, which sections could fit in a regular truck and be easily transported and set up even in remote cities and towns. The Moving Wall is the first and oldest of the two and it has been touring the USA since 1984. The Wall that Heals was created by the Vietnam Veterans Memorial Fund in 1996. The images below were downloaded from the Moving Wall's web site

"The Moving Wall" is the half-size replica of the Washington, DC Vietnam Veterans Memorial and has been touring the country for almost twenty years. When John Devitt attended the 1982 dedication in Washington, he felt the positive power of "The Wall." He vowed to share that experience with those who did not have the opportunity to go to Washington.
John, Norris Shears, Gerry Haver, and other Vietnam veteran volunteers built The Moving Wall. It went on display for the first time in Tyler, Texas in October of 1984. Two structures of The Moving Wall now travel the USA from April through November, spending about a week at each site.


On Veterans Day 1996, the Vietnam Veterans Memorial Fund unveiled a half-scale replica of the Vietnam Veterans Memorial in Washington, D.C., designed to travel to communities throughout the United States.
"Bringing The Wall Home" to communities throughout our country allows the souls enshrined on the Memorial to exist, once more, among family and friends in the peace and comfort of familiar surroundings. The traveling exhibit, known as The Wall That Heals, allows the many thousands of veterans who have been unable to cope with the prospect of "facing The Wall" to find the strength and courage to do so within their own communities, thus allowing the healing process to begin.
The Wall That Heals also features a Traveling Museum and Information Center providing a comprehensive educational component to enrich and complete visitors' experiences. The Museum chronicles the Vietnam War era and the unique healing power of the Vietnam Veterans Memorial, while the Information Center serves as a venue for people to learn about friends and loved ones lost in the war.

According to themovingwall.org some photos are granted to use for programs, posters, newsletter, web pages, or newspaper articles concerning The Moving Wall.