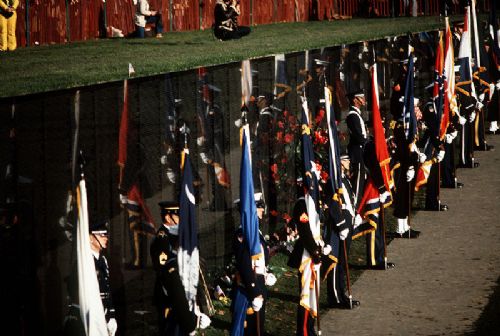 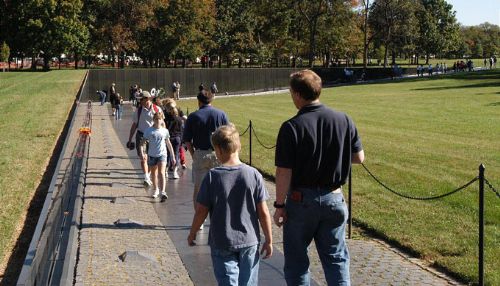 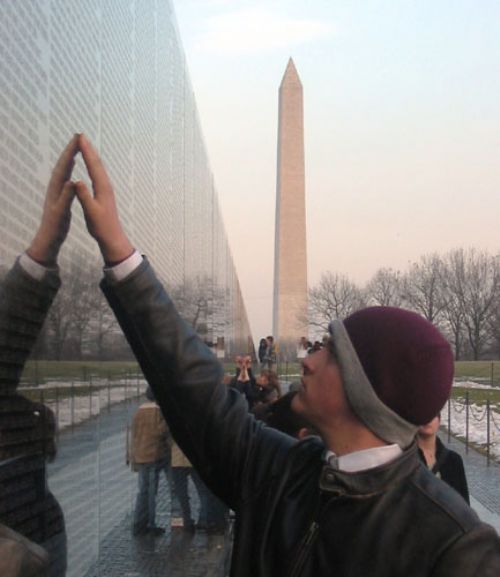 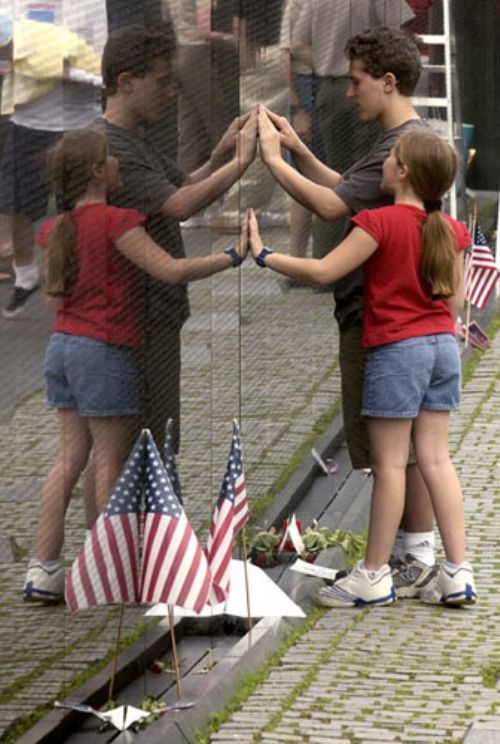 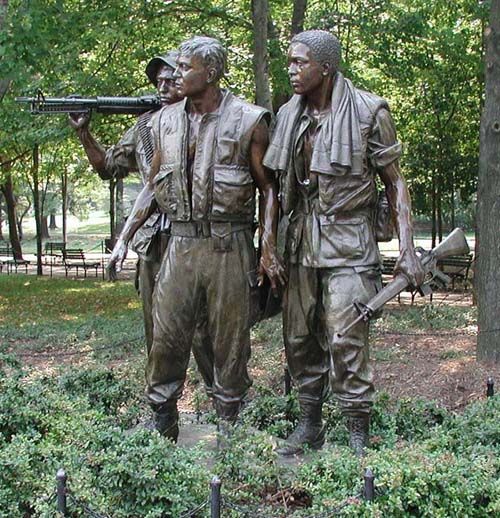 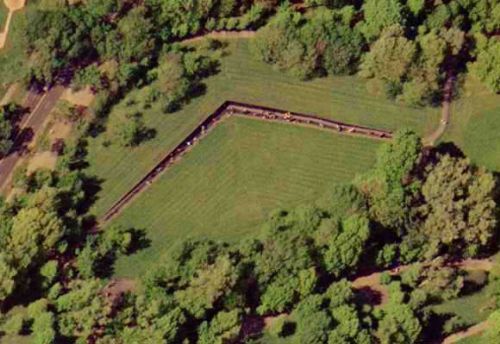 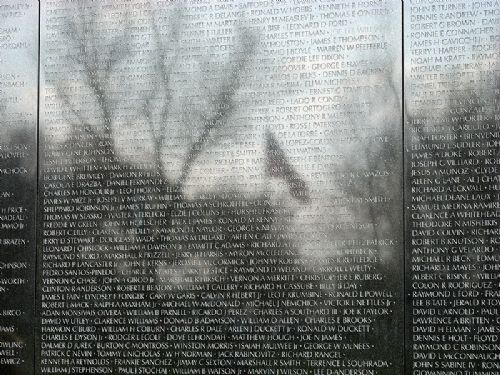 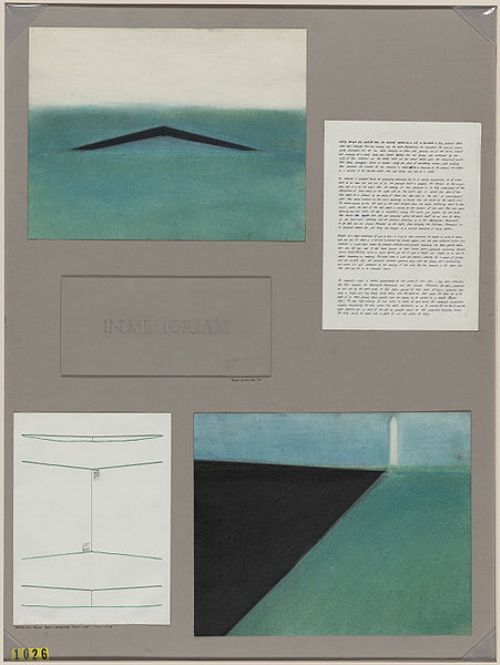 Congress authorized the site on July 1, 1980, and a competition to design the memorial was announced later that year. On May 6, 1981 a jury of eight architects and sculptors unanimously selected a design by Maya Ying Lin, a 21 year old Yale University architecture student from Athens, Ohio, as the winner from 1,421 entries. Lin has originally designed the Memorial Wall as a student project. Controversially, the design lacked many of the elements traditionally present in war memorials, such as patriotic writings and heroic statues, and a flagstaff and figurative sculpture, The Three Soldiers, was added to the design on January 1982.
The design was formally approved on March 11, 1982 and the ground was formally broken on March 26, 1982, with dedication of the memorial on November 13, 1982 after a march to its site by thousands of Vietnam War veterans. The Three Soldiers statue was installed in 1984, and the Vietnam Womens Memorial was dedicated on November 11, 1993.
Controversy surrounded the walls dedication, with some veterans groups decrying it as inappropriate or unpatriotic. Since then, however, both veterans and the American public in general have come to admire the Wall, which is one of the most visited sites in Washington.

Structure
The Memorial Wall is made up of two black granite walls 246 feet 9 inches (75 metres) long, designed by Maya Ying Lin. The walls are sunk into the ground, with the top flush with the earth behind them. At the highest point (the apex where they meet), they are 10.1 feet (3 m) high, and they taper to a height of eight inches (20cm) at their extremities. Granite for the wall came from Bangalore, India. One wall points toward the Washington Monument, the other in the direction of the Lincoln Memorial, meeting at an angle of 125° 12′. Each wall has 72 panels, 70 listing names (numbered 1E through 70E and 70W through 1W) and 2 very small blank panels at the extremities. There is a pathway along the base of the Wall, where visitors may walk, read the names, make a pencil rubbing of a particular name, or pray.
Inscribed on the wall are the names of those who died in chronological order, starting at the apex on panel 1E in 1959 (although it was later discovered that the first casualties were military advisors who were killed by artillery fire in 1957), moving day by day to the end of the eastern wall at panel 70E, which ends on May 25, 1968, starting again at panel 70W at the end of the western wall which completes the list for May 25, 1968, and returning to the apex at panel 1W in 1975. Symbolically, this is described as " wound that is closed and healing." Information about rank, unit, and decorations are not given. The wall listed 58,159 names when it was completed in 1993; as of 2005, when four names were added, there are 58,249 names, including 8 women. Approximately 1,200 of these are listed as missing (MIAs, POWs, and others), denoted with a cross; the confirmed dead are marked with a diamond. If the missing return alive, the cross is circumscribed by a circle, (although this has never occurred as of August 2005); if their death is confirmed, a diamond is superimposed over the cross. Optima is the typeface used on the wall.
The first inscription on the wall reads, "IN HONOR OF THE MEN AND WOMEN OF THE ARMED FORCES OF THE UNITED STATES WHO SERVED IN THE VIETNAM WAR. THE NAMES OF THOSE WHO GAVE THEIR LIVES AND OF THOSE WHO REMAIN MISSING ARE INSCRIBED IN THE ORDER THEY WERE TAKEN FROM US."
A short distance away from the wall is another part of the memorial, the Three Soldiers statue. It was designed to complement the Vietnam Veterans Memorial, by adding a more traditional component. The statue, unveiled in 1984, was designed by Frederick Hart, who placed third in the original competition.
Also part of the Memorial is the Vietnam Womens memorial. It is located a short distance south of The Wall, north of the Reflecting Pool. It was designed by Glenna Goodacre and dedicated on November 11, 1993.

Memorial Commemorative Plaque
A memorial plaque was dedicated on November 10, 2004 at the northeast corner of plaza surrounding the Three Soldiers statue to honor veterans who died after the war as a direct result of injuries suffered in Vietnam, but who fall outside Department of Defense guidelines. The plaque is a carved block of black granite, 3 feet by 2 feet, inscribed "In memory of the men and women who served in the Vietnam War and later died as a result of their service. We honor and remember their sacrifice."

COPYRIGHT NOTICE
This text is available under the terms of the GNU Free Documentation License (see Copyrights for details). Wikipedia article