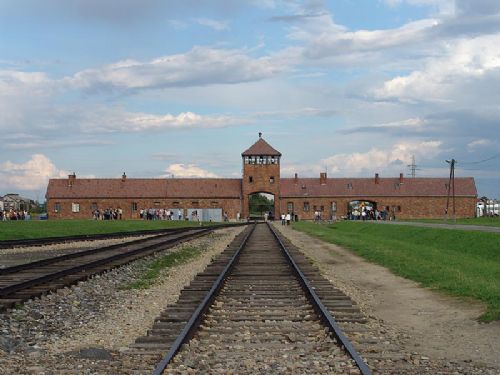 The Auschwitz-Birkenau State Museum is located on the site of the Nazi extermination camp where some 2-3 million people were killed during world war II. The museum was created by an act of the Polish parliament on July 2, 1947, and includes the grounds of two extant parts of the Auschwitz I and Auschwitz II-Birkenau concentration camps. You can find more information about the museum here.

Today, the Auschwitz I museum site combines elements from several periods into a single complex: for example the gas chamber at Auschwitz I (which did not exist by the war's end) was restored and the fence was moved (because of building being done after the war but before the establishment of the museum). However, in most cases the departure from the historical truth is minor, and is clearly labelled. The museum contains very large numbers of men's, women's and children's shoes taken from their victims; also suitcases, which the deportees were encouraged to bring with them, and many household utensils. One display case, some 30 metres long, is wholly filled with human hair which the Nazis gathered from the people they slaughtered.
UNESCO World Heritage Site. Ruins at Birkenau, 2002.

Auschwitz II and the remains of the gas chambers there are also open to the public. The Auschwitz concentration camp is part of the UNESCO list of World Heritage Sites. The ashes of the victims of the SS were scattered between the huts, and the entire area is seen as a grave site.

Other information:
Video by David Waxman