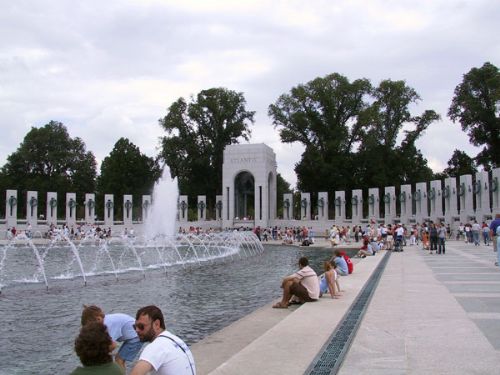 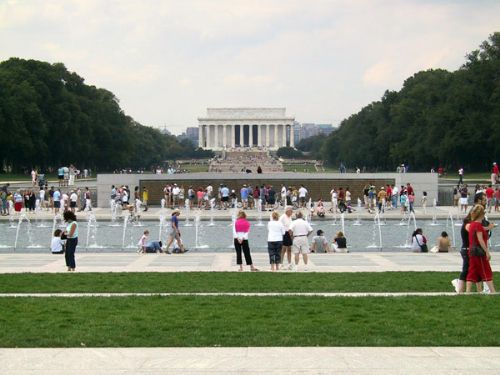 
The National World War II Memorial is a national memorial to Americans who served and died in World War II. It is located on the National Mall in Washington, D.C., at the eastern end of the Reflecting Pool, between the Lincoln Memorial and the Washington Monument. It opened to the public on April 29, 2004, and was dedicated by President George W. Bush on May 29, 2004, two days before Memorial Day. It is administrated by the National Park Service.

"Here we mark the price of freedom"each of the 4000 gold stars represents 100 Americans who died during the war.The memorial consists of 56 pillars, each measuring 17 feet (5.18 m) tall, arranged in a semicircle around a central plaza with two 43-foot (13.11 m) arches on opposite sides. Each pillar is inscribed with the names of the then-48 U.S. states, the District of Columbia, and the Alaska Territory and Territory of Hawaii, the Commonwealth of the Philippines, Puerto Rico, Guam, American Samoa, and the U.S. Virgin Islands. Each arch is inscribed with "Atlantic" and "Pacific." Freedom Wall, containing 4000 gold stars, one for each 100 American deaths incurred in the war, is also a part of the memorial. The plaza is 337 feet, 10 inches (103 m) long and 240 feet, 2 inches (73 m) wide, is sunk 6 feet (1.83 m) below grade, and contains a pool that is 246 feet, 9 inches, by 147 feet, 8 inches (75 by 45 m).

The memorial under construction (August 2002)
The Pacific end of the memorialIn 1987, World War II veteran Roger Durbin approached Representative Marcy Kaptur, a Democrat from Ohio, to ask if a World War II memorial could be constructed. Kaptur introduced the World War II Memorial Act to the House of Representatives as HR 1624 on December 10. The resolution authorized the American Battle Monuments Commission (ABMC) to establish a World War II memorial in "Washington, D.C., or its environs," and was passed by voice vote of the full House on June 22, 1992.

However, in October 1992 the Senate version (S. 2244) was not approved before Congress went into recess. Kaptur reintroduced it in the House as HR 682 on January 27, 1993, a day after Senator Strom Thurmond (a Republican from South Carolina) introduced companion Senate legislation.

On March 17, the Senate approved the act, and the House approved an amended version of the bill on May 4. On May 12, the Senate also approved the amended bill, and the World War II Memorial Act was signed into law by President Bill Clinton on May 25 of that year, becoming Public Law 103-32.

On September 30, 1994, Clinton appointed a 12-member Memorial Advisory Board (MAB) to advise the ABMC in site selection and design, and to promote fundraising to support memorial construction. The board was led by two co-chairs: Senator Bob Dole, a decorated World War II veteran and 1996 Republican nominee for president, and Frederick W. Smith, the president and chief executive officer of FedEx Corporation and a former U.S. Marine Corps officer. Of the $197 million raised in cash and pledges, the U.S. federal government provided about $16 million; the remainder was supplied by private donors and organizations.

On October 6 and October 7, the House and Senate passed Joint Resolution 227, mandating that the monument be located somewhere in downtown Washington, near other memorials. The president signed the resolution into law on October 25.

West Potomac Park (between Ohio Drive and the north shore of the Potomac River, northwest of the Franklin Delano Roosevelt Memorial);
Constitution Gardens (east end, between Constitution Avenue and the Rainbow Pool);

Grounds of the Washington Monument (at Constitution Avenue between 14th and 15th Streets, west of the National Museum of American History);

Freedom Plaza (on Pennsylvania Avenue between 14th and 15th Streets)
Henderson Hall, adjacent to Arlington National Cemetery (this site was dropped from consideration because of its unavailability).

Friedrich St. Florian’s design was selected in 1997, but construction did not begin until September 2001. The memorial took more than two years to complete and opened to the public on April 29, 2004, and was dedicated on May 29. At its opening, thousands of people visited the memorial from all parts of the country. Many veterans came; currently, American World War II veterans are dying at a rate of over 1,000 per day. The memorial became a national park on November 1, when authority over it was transferred from the American Battle Monuments Commission to the National Park Service.

Many citizens liked the park-like atmosphere of the memorial. Others remarked that the plaza was symbolic of the nation’s commitment to the war because it recreated the sense of community that the war stimulated within the nation.

Critics such as the National Coalition to Save Our Mall opposed the design and the location of the memorial. The main critique of the location is that it interrupts the vista between the Washington Monument and the Lincoln Memorial. It was also criticized for taking up open space that has historically been used for major demonstrations and protests.


The northern end of the memorial, dedicated to the Atlantic theaterThere were also aesthetic objections to the design. A critic from the Boston Herald called the monument "vainglorious, demanding of attention and full of trite imagery." The Philadelphia Inquirer noted the irony that "this pompous style was also favored by Hitler and Mussolini" (see Nazi architecture).

Most irksome to the critics was the expedited approval process, which is normally quite lengthy for such an important site. Congress, worried that World War II veterans were dying before an appropriate memorial was built, passed legislation exempting the National World War II Memorial from further site and design review. They also dismissed pending legal challenges to the memorial.